Cambodian Labor: Will It Get Bloodier Before It Gets Better?

A version of this article was first published in Tradegood Viewpoints, August 29, 2014. 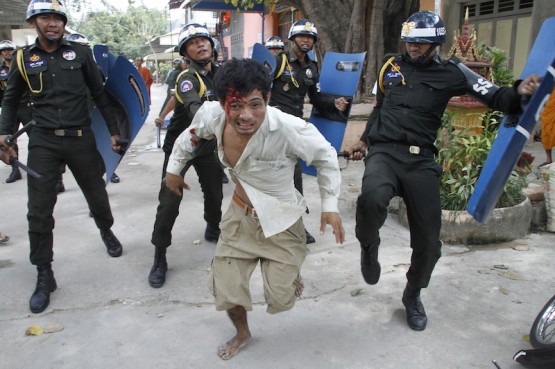 Cambodia has seen its fair share of labor unrest over the years, but when government security forces shot dead five protestors in January, two things became evident — that fundamental changes are needed in the country’s minimum wage structure and foreign investors, in the absence of government leadership, are going to have to step up to the plate and ensure workers get a living wage if the country is to remain a politically stable and attractive investment destination.

Known as “The Land of Smiles,” Cambodia is considered one of Asia’s great economic success stories, and it looks like more is on its way. The Economist Intelligence Unit predicts that over the next five years the country’s economy will grow at an annual rate of 7.4%, exceeding the yearly 7% growth it achieved since 2010.

According to the World Bank, just 10 years ago, Cambodia’s 15 million people faced a staggering poverty rate of 50%. Today, it’s down to 20%. Yet, the country remains vulnerable to a number of economic variables that could return many to poverty.

That’s because Cambodia’s economy is largely export driven, relying on agriculture, garments, construction, and international tourism. This is also reflected in the labor force, where 55% are engaged in agriculture, 16.9% in industry, and 17% in services. Garment manufacturing is the country’s biggest industry, employing around 600,000 people and accounting for 80% of the country’s exports, says the BBC’s 2014 Country Profile of Cambodia.

Despite its success in reducing poverty, Cambodia is still one of the poorest countries in Asia, plagued by endemic corruption, limited educational opportunities, and poor job prospects. The CIA’s Fact Book 2014 highlights that approximately 4 million people live on less than US$1.25 a day, and 37% of children under the age of 5 suffer from chronic malnutrition. More than 50% of the government’s budget comes from donor assistance, making the country one of the most heavily dependent on foreign aid in the region.

With half of Cambodia’s population under the age of 25, the biggest challenge over the next decade will be building an economy where the private sector can create enough jobs to handle this demographic imbalance. And while the Asian Development Bank is forecasting that annual per capita GDP will reach US$1,080 this year – meaning Cambodia will graduate from a low-income to a lower-middle income country – the problem of low wages, particularly in its flagship garment industry, will dominate the attention of labor groups, international brands, and the government in the months and years ahead.

In addition to being Cambodia’s largest employer, garment manufacturing is the country’s main foreign exchange earner, having raised over US$5.5 billion in export revenues in 2013, according to the government. Exports are mainly to the United States and Europe. But while revenues have risen over the past decade, real wages have declined. The Voice of America reported in May that last year workers vented their frustration by clocking over 900,000 strike days, mostly in an effort to raise the minimum wage.

Many workers claim they need to log 10-14 hour days just to get by, and labor unions have been pressing the government to set a new minimum wage of US$160 per month. But in December last year, the government announced that such an increase would not come until 2018. Instead, it hiked the minimum wage from US$80 to only $100 a month, setting off new rounds of strikes. In January, government security forces opened fire on striking workers, killing 5 and injuring over 30. The incident made international headlines and created a public relations headache for brands such as H&M, The Gap, Puma, and Walmart.

In May, leading brands and local manufacturers responded, delivering three key messages to the Cambodian government: (1) that they are willing to pay their subcontractors more to ensure workers receive a higher minimum wage; (2) that the government must work faster to set up a mechanism that reviews the minimum wage on a regular basis and in a realistic manner; and (3) that it stop using violence and the courts against workers and unions. Wage talks between the government and labor groups are continuing, with a major meeting scheduled for September.

Foreign Brands and Investors Need to Step Up to the Plate 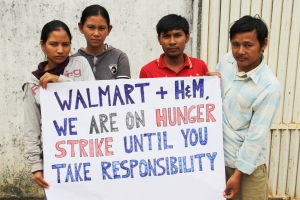 But don’t expect the government to take the lead in raising wages. That’s because it fears that pressuring companies to do so will force them to flee to countries with lower labor standards, such as Myanmar. This is why the private sector now needs to seize the initiative and reassure the government and labor unions that they are in Cambodia for the long haul. The best way to do that is by investing in their workers and setting a living wage that is sufficient to cover basic needs.

Garment manufacturers and retailers don’t have to look far for models. Late last year, H&M announced a program to boost wages in its subcontractor factories. Its five-year roadmap promises a fair living wage and an annual review of salaries. The company also wants to improve industrial relations, strengthen unions, and work with the government to promote labor rights, including reducing child labor. It sees such moves as an investment in its “customer offering,” given the importance of labor issues to consumers. But it knows it can’t reform the industry alone and has asked other brands to join it.

Plans like H&M’s, to be successful, also need to call on brands and retailers to develop more long-term relationships with their suppliers to ensure better control over working conditions. That and higher wages can result in increased productivity and enable garment-producing countries to take wages out of the competition. This should be doable given that many brands, despite increased wages in China, are still manufacturing there due to the higher productivity and skills of its workforce.

The International Labor Organization’s Better Factories Cambodia (BFC) program can also play a bigger role. Launched in March, the BFC database was set up to name and shame factories that flout Cambodia’s labor laws and international standards. But BFC’s list currently doesn’t link factories to their international buyers, which limits its effectiveness, so expanding the database to get brands invested in the process would be the next logical step if the industry is serious about improving labor conditions.

Cambodia and the Garment Industry at a Crossroads

How Cambodia resolves its labor woes in the coming months could very well determine its economic future, and with it, that of foreign investors. Without a fair living wage, the country is almost guaranteed more labor strife and violence. For brands and manufacturers who need their sourcing countries to be stable and predictable, such a scenario would be high-risk and simply bad for business.